On May 4th, 2019 we attended our fourth Yallwest. If you don’t know, Yallwest is a book festival in Santa Monica, California which features author panels, signings, giveaways, and general bookishness with a focus in Young Adult and Middle Grade books. It is one of our favorite events of the year because it’s basically a full submersion into bookish culture, and you rarely get that outside the bookstagram communtiy.

Usually we go it alone, but one time we managed to drag Tree’s sister along, and this year Bree’s boyfriend came along with some of our other friends! It was nice to have a group of people to chat with in line who aren’t strangers! Even though, “book people are nice people” – Bree, at our first Yallwest.

Yallwest can be hella crazy and thankfully we avoided most of the messy ARC drops and disappointments. The one crazy event was the Sorcery of Thorns ARC drop. Picture a mass of humanity trying to get 58 tickets and there is no structure or line or organization of any kind. Bree managed to get one and Tree bowed out before it got too intense. This is how our friend felt after escaping the chaos:

Our goals/expectations for this year were pretty low (even though we made a hella intense schedule again, because that’s just who we are). We each had a couple ARCs that we really wanted, but other than that we just wanted to enjoy the day. Weirdly enough, each year we set out with a “mission” of sorts.

2016: Figure out what the hell Yallwest is and how to navigate it. Maybe get some books signed. I think this is the only year we went to a panel too.
2017: We went to a lot of author signings and got a good amount of swag!
2018: This year was all about the ARCs. We each went a little crazy at the idea of free books, and picked up whichever ones we could get our hands on.
2019: We focused on the main ARCs we wanted and had a good time. (Basically we weren’t gonna stress and were more focused on enjoying ourselves.) 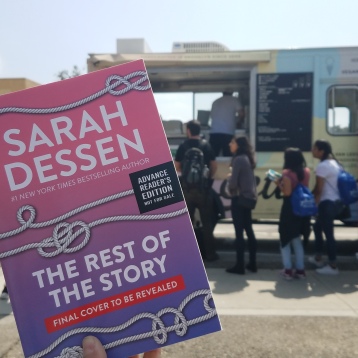 Highlights of the Day:

Not to be ~those~ people, but here are our hauls:

BREE: I’m really happy with my haul this year. I got a total of 15 books, 6 with the help of my very patient boyfriend (Thank you Quinn!), and an assortment of swag. I’m most excited about Sorcery of Thorns (I’m already a third of the way through it), and With the Fire on High (I’ve heard good things, but also that cover is gorgeous). On top of that, I’m absolutely thrilled to have gotten my hands on a signed a physical ARC of Wilder Girls! I got the chance to read the eARC a couple months ago and absolutely fell in love with the  story and the characters. As for swag, I always really enjoy getting tote bags (Quinn even insisted on keeping his lol), and I know the pouch from Penguin Teen is going to be very useful.

TREE: I also got a Kingdom of Souls, but left it in Bree’s bag #oops and two tote bags, but they did not photograph well. I am super excited for The Fountains of Silence, Wilder Girls, & With the Fire on High. I also really like the pouch, the Angie Thomas pins, and the Stay Peculiar pennant from Owlcrate. I am happy I mostly ended up with ARCs that I am excited about and already planned on reading. 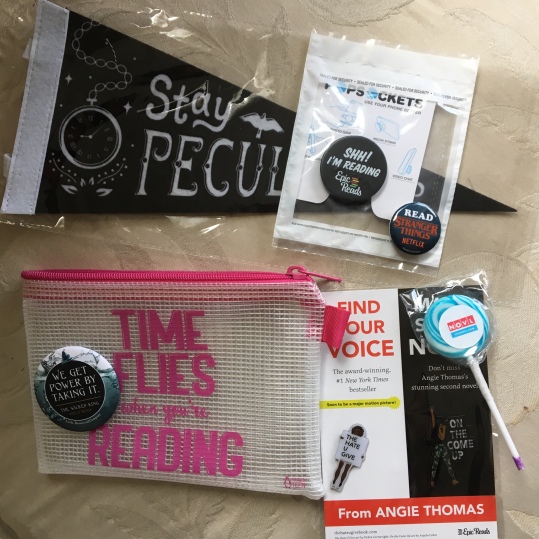 Thanks so much for checking out our Yallwest recap!

Goodreads Links for ARCs/Books Pictured Above:
Sorcery of Thorns
Let Me Hear a Rhyme
With the Fire on High
The Beholder
The Rest of the Story
Wilder Girls
Sabrina: Season of the Witch
House of Salt and Sorrow
As Many Nows as I Can Get
A Match Made in Mehendi
Only Ashes Remain
The Bone Houses
Kingdom of Souls
The Fountains of Silence
From Twinkle, with Love (Owlcrate Edition)