So I signed up for KU again…I got three months for 99 cents during Black Friday so I really couldn’t pass it up. But a few of the reviews are from when I last had KU in September 2022. 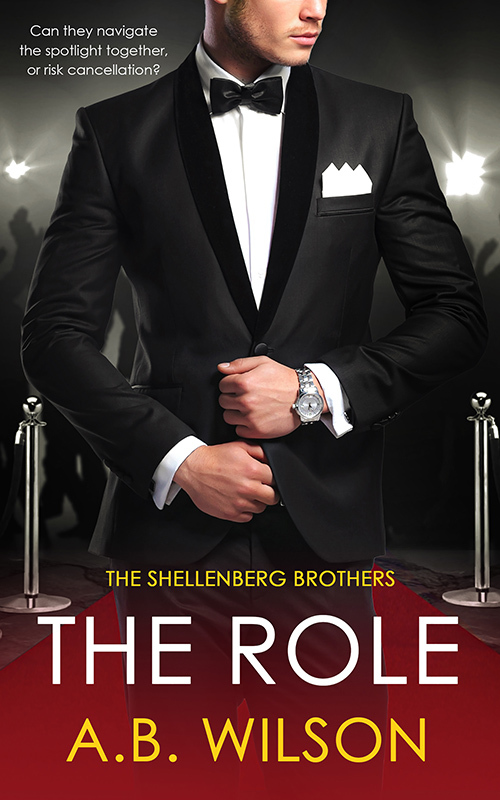 Plot: Alina and Markus connect instantly on a film set and their instant chemistry might be what saves the show.

Thoughts: The plot of this one makes no sense/would never happen in real life. But, I still had a fun time with it. I have been struggling with contemporary romances lately, but this one kept my interest.

The writing was solid and the characters had excellent chemistry. I did think it was a bit too insta lovey, but the chemistry between Alina and Markus made it work for me (mostly). I’m invested enough to pick up the second book in the series which is a sport romance following Markus’ brother. 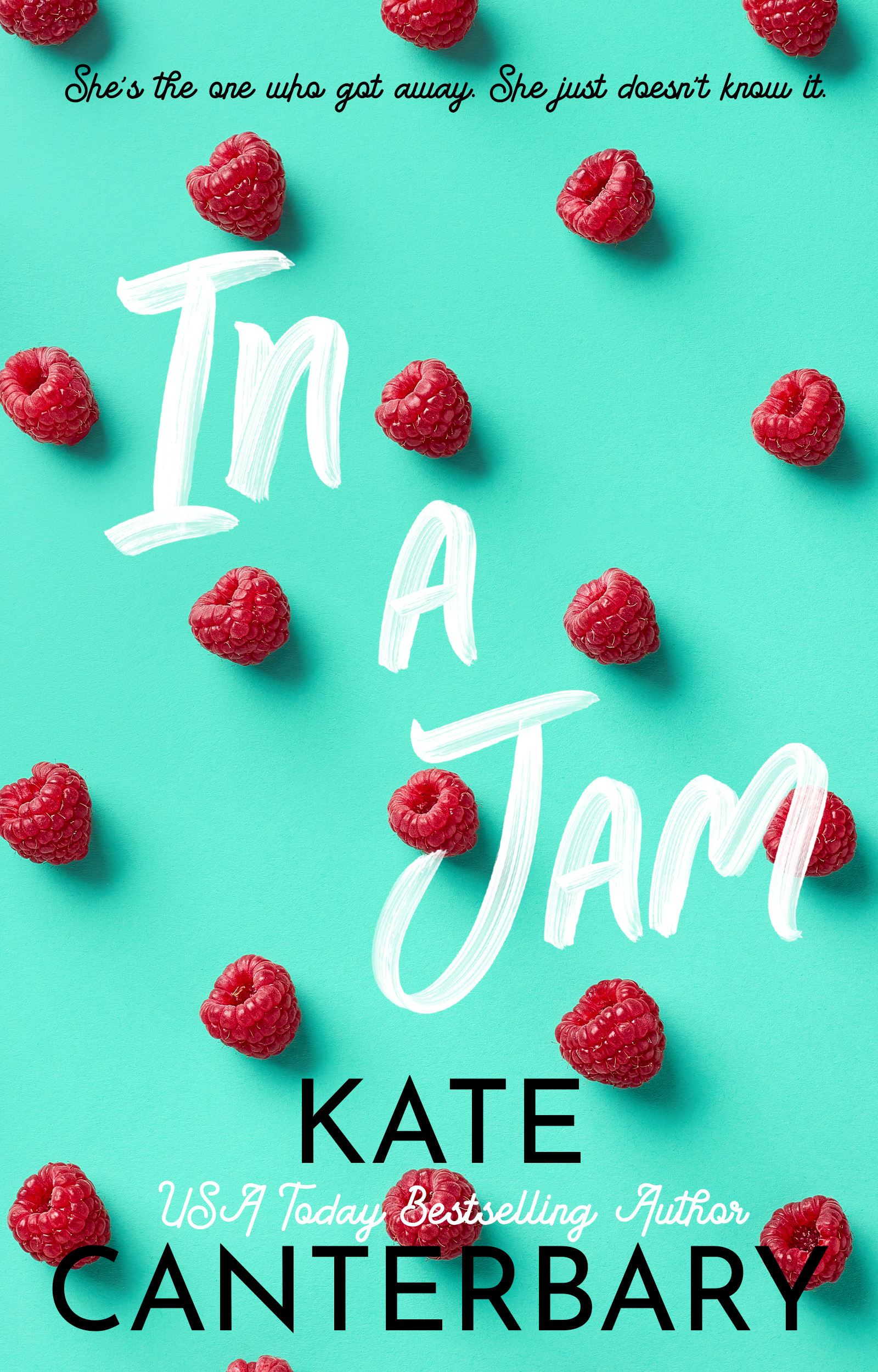 In a Jam by Kate Canterbary

Plot: Shay inherits a tulip farm (lmao), but cannot truly inherit unless she is married (y’all know where this is going!!). So she goes back to the tiny town she never planned on returning to check out the farm. Enter Noah, her high school bestie who offers to marry her right away. Obviously, it will just be a marriage on paper, especially since Noah is raising his niece who is attached to Shay from the moment she meets her and neither of them want to confuse her.

Thoughts: Contemporary romance (specifically traditional publishing) hasn’t been hitting lately so anytime someone recs an indie book I’m side eyeing it HARD. IN A JAM was a delight!! The book made me wish I liked jam which is no small feat bc I really am not a jam person.

Noah is a quiet grumpy man, but he has been in love with Shay since high school and the whole “prove it” moment was so cute.

And Shay!! I just wanted the best for her and I loved how she was just figuring things out and it felt natural. This book is a slowburn for the relationship and also her journey and it worked so well for me. Shay is a teacher and I just have a soft spot for teacher main characters. Plus, the fact that all her friends were teachers too? Loved that.

I also loved that Canterbary doesn’t villainize “the other woman” and yeah there is some jealousy, but I hate when authors reduce all women who are not the main characters to one dimensional stereotypes. And this woman was annoying, but it’s resolved so well.

My only critique is that Gennie didn’t seem like a real kid at the beginning, but as I read on, it didn’t bother me as much. I loved her love of pirates and fancy hair and her swearing. She just wants to be loved and I love her.

Overall, I loved this slowburn, marriage of convenience story between these two characters.

TW: incarceration of a loved one, death of a grandparent/parent (off page; prior to novel), strained relationship with parents 4.5/5 stars 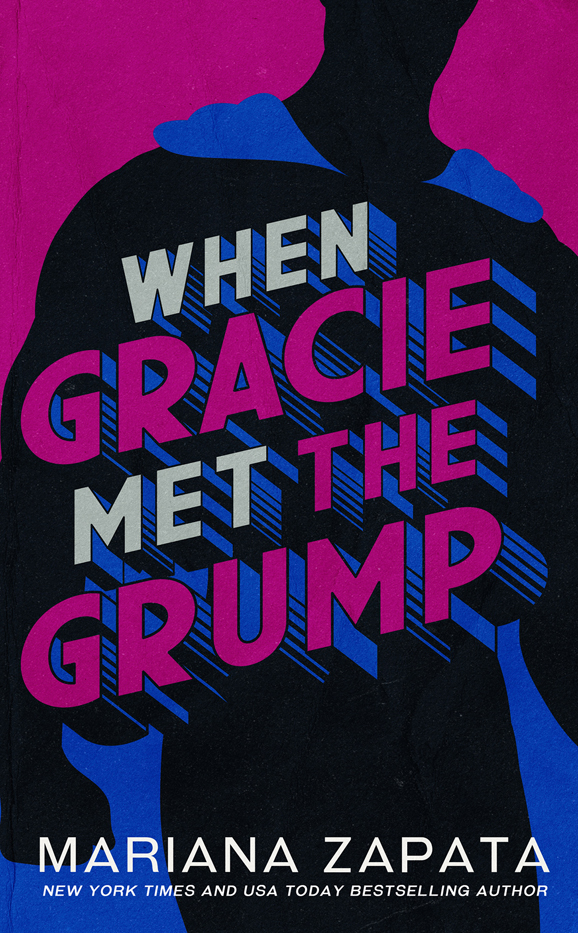 When Gracie Met the Grump by Mariana Zapata

Plot: A mysterious man crashed into Gracie’s backyard and her life is never the same.

Thoughts: I’m not really sure what to make of this one. It has a lot of MZ’s elements, grumpy/sunshine characters, a MC down on her luck (but is still positive), the slowest of slow burns, and writing that is wordy. Which normally works for me, but here it felt repetitive even though we were in a non contemporary world. (Lowkey felt like an AU of one of her other books in a non contemporary world).

I waffled back and forth on if I liked the superhero elements. I am all for creatives exploring new genres/sub genres and applaud MZ for trying something new. I just think she needed to expand the word a bit more. I was so confused with all the side characters and I don’t need to really understand world building, but this book needed more of it.

I think it is hard to balance her wordiness + world building. I think if she changed up her style a bit more and included less detail etc. she could have focused on creating a cool world that was more immersive. Because it was lacking and I just felt like lots of conversations needed to happen that did not happen on page.

Overall, this one was a bit of a miss for me, but I am always entertained by some of the things her characters say. Gracie and Alex had some really cute moments, but not enough to make me forget that I had no idea what was happening lol. 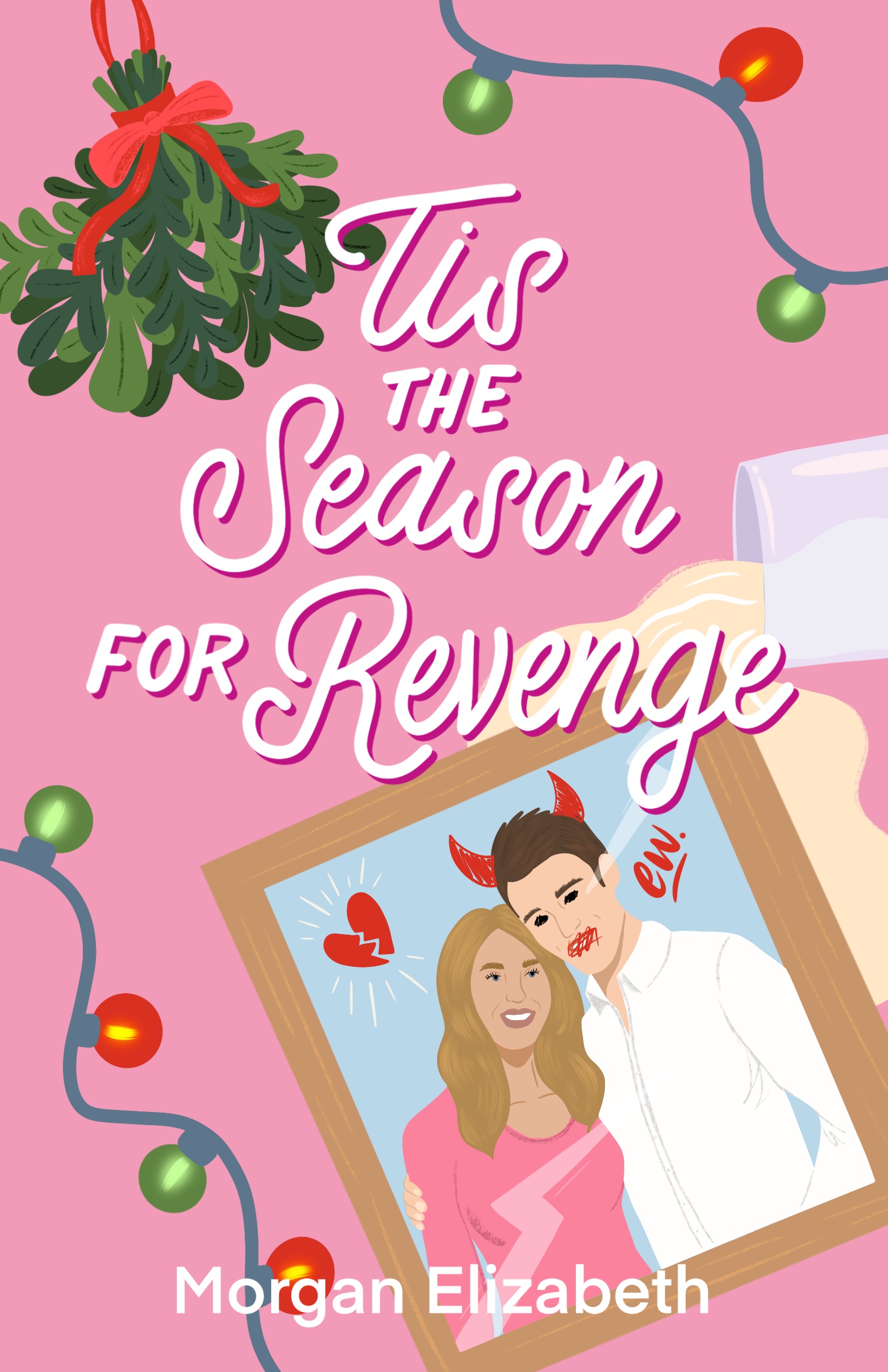 Tis the Season for Revenge by Morgan Elizabeth

Plot: Abbie tries to get revenge on her ex by dating his boss.

Thoughts: This book is ridiculously readable. I read it in two sittings and was WAITING for the other shoe to drop.

That being said I had lots of minor issues with this one. Damien is WAY too perfect in a way that reads WRITTEN BY A WOMAN (which obviously this is a common thing in romance, but it was over the top for me here) and I didn’t like how him being Latinx was discussed. To me it felt very surface level he has a Latinx last name, uses Spanish terms of endearment, is tan, and that is it??? Idk it just felt very off to me. I also don’t like that she is darker than him on the cover, obviously Latinx people do not have a certain skin tone, but he is described as tan and she is not, which added to my discomfort.

I also thought the author missed the mark *a tad* while discussing the whole “I Love Pink”/hyper femininity and giving her MC major Elle Woods energy. Like Abbie lives in New York in 2022, has she never met another hyper femme person? Spoiler – Legally Blonde did it better.

Overall, I see why so many people enjoyed it and honestly I mostly enjoyed my time reading this, I just got an ick vibe from enough comments/moments that as a whole it didn’t work for me.

Look I knew this was going to be spicy, but seriously this needs a different cover bc this book is pretty explicit and this cover is way too cutesy.

TW: domestic violence (not MC, but to a side character; MMC is this woman’s lawyer), toxic relationship (FMC is leaving at start of book) 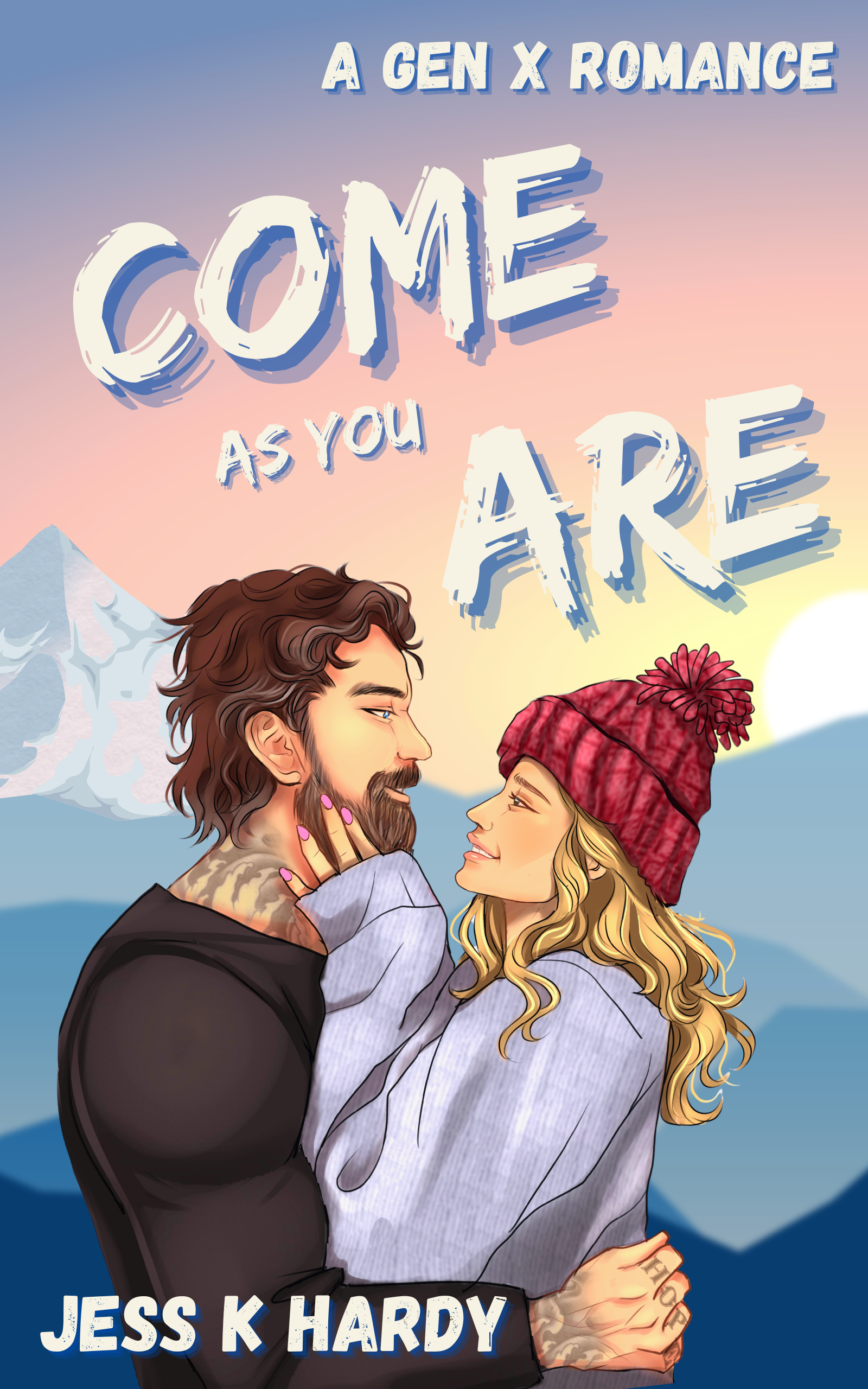 Come As You Are: A Gen X Romance by Jess K. Hardy

Plot: Ashley’s ski resort is struggling and to help save costs, her mom hires the men from Little Timber, an organization led by Madigan that helps former addicts adjust back into society. Neither of them have time for love, but they can’t help themselves.

Thoughts: I mostly really enjoyed this one. I loved the ski setting and that this is low key a Christmas book? This book has a sort of found family element to it, even though Madigan is close with his parents and Ashley’s mom lives on the resort too, but with all the men who are helping out, it has a fun atmosphere.

I did like reading about older characters, but a lot of the boombox/cassette tape mentions made me roll my eyes a bit and felt a bit heavy handed. Was it cute, yes. Ashley and Madigan are both so deserving of love and their pasts keep them from opening up and I loved seeing them try to resist falling in love.

My only complaint is that nothing truly pulled me into the story. I liked everything, but I didn’t love anything you know? It’s a good book, but I needed a bit more depth? Or plot? Or conflict? Or something? Not all of those things, but I needed the book to me a bit more of something for me to truly love it. 3.5/5 stars

Do you have any KU recs for me?